You never know when the unexpected will happen in your travels. Learn how How We Survived A Worst Case Scenario while traveling. 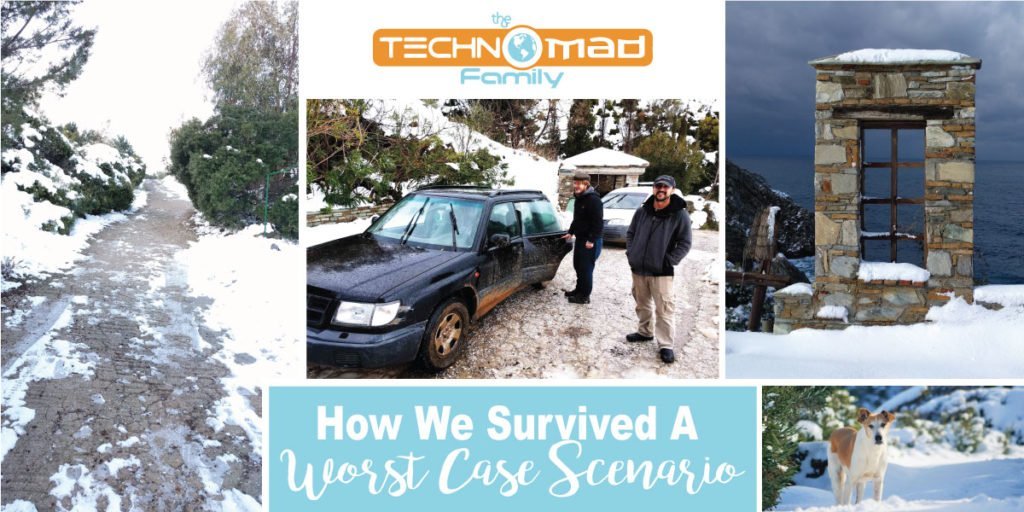 Some might think that traveling is nothing but wonderful perks. Waking up on beachfront hotels, visiting places that only dream about, but for every great experience, there is an equally opposite harrowing event. Being prepared can help you to be able to survive any worst case scenario while traveling with your family.

Every moment there is always the chance that SHTF.

One of our first journeys, as Technomads, took us to a villa on one of Greece’s larger islands on the coast of the Aegean Sea. Our friends whom had been World Travelers for a year or so before had set up to house sit a villa over the winter months and had made the arrangements for us to join them for their time there. We were tasked with feeding the animals (a dog, two cats, and a dozen or so chickens), maintaining the Villas from the rainy winters (placing buckets to catch the dripping water from the ceilings to not ruin the wood floors), and other general tasks. There was an onsite carpenter living there to fix things during the winter months before the villa was to be used during the rest of the year that it was AirBNBed out for weddings and other events.

Upon our arrival, as we were settling into the 10 hour time difference and jet lag while trying to settle in.

Our friends maintained the largest Villa and main kitchen and dining area, which came with the task of heating up every day, not with a heater, but a fire. Our first bit of preconceived idea of how easy it is to build and maintain a fire. The property had a large supply of wood on site, but over the course of several weeks, the pile quickly diminished. They had a chainsaw and ax on site that could be used for chopping down trees for firewood. Only we learned quickly that even though a tree is dead, it doesn’t make it good for fire. They had learned the hard way that wood that isn’t dry and treated would take longer to heat and produce more smoke from the water in the wood. Which for them didn’t seem like that big of a deal.

Although, unbeknownst to us, we would be in for an experience that was a big deal. 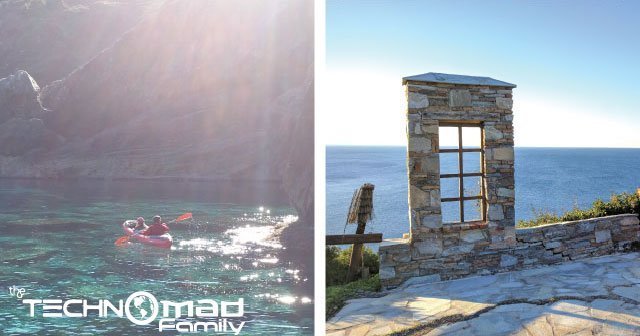 The weeks following our arrival we had been experiencing amazing weather, our kids were outside playing in springtime weather in December, the Aegean Sea was crystal clear and we had been taking rafts exploring the coast and caves.

Then our troubles started with an unprecedented snowstorm that hit our island. That many of the older locals recall never had seen anything like this in over 60 years. Lucky for us we had heard a storm was on its way, and my wife had felt prompted to stock up on food and water from our store run. Which we only went once a week since it was a 45-minute drive one way. After several days of consistent snowfall, we received several feet of snow. 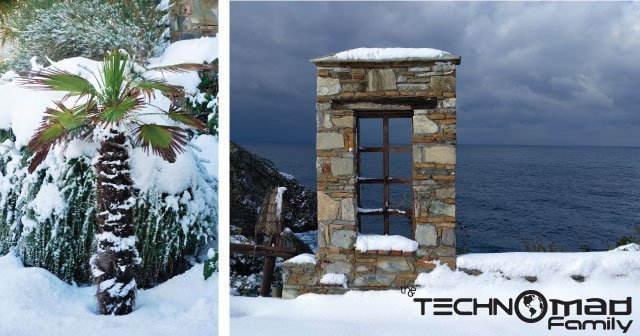 THE CALM AFTER THE STORM

The first day or so was pleasant, enjoying the beautiful snow covered villa and calm weather, followed by building snow forts, having snowball fights and sledding down the driveway. Then our troubles started. 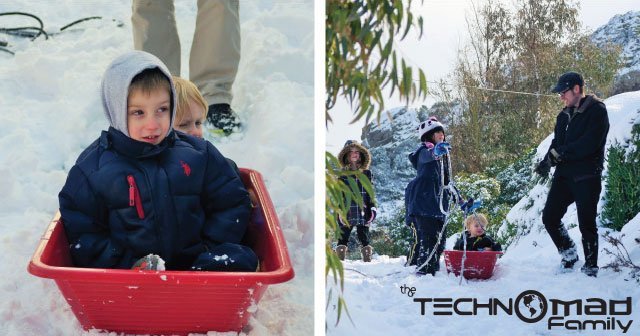 First, the Carpenter and his family didn’t have enough food and supplies, despite having offered them some of ours, they began to be impatient and worried, which lead to panic. They wanted to go home to Athens and didn’t want to wait it out, so they contacted the village above to see if they could plow the roads between us.

We had the monumental task of shoveling the villa’s driveway, a roughly 50 yards rough concrete, uphill using with gardening shovels and a broken rake and brooms. Though we didn’t have the proper equipment I took the foresight to bring several pair of work gloves because you never know what will happen. For a list of items that helped us during this whole ordeal that we suggest you to bring while traveling for “Worst Case Scenarios” –>Click Here<–.

While we waited for the village to attempt to plow the road down to us. It came to our attention that the Carpenter’s van’s treads were bald, and wouldn’t be able to conceivably make it up to the climb. Fortunately for him, the owner left us a 1980’s 4WD Subaru Outback, which would have to be used to tow the van.

Note: For those of you who do wish to venture to Europe from the States- let it be known that Europeans use primarily stick shift. If you wish to get around or rent it will cost you much, much more to rent an automatic. Let this be a lesson learned the hard way.

Which unfortunately I hadn’t driven in over 15 years, so attempting to relearn in these conditions was not ideal, so the task of driving. Meaning that this most unfortunate task of not only driving but pulling the van would fall upon my friend.

The village was eventually able to make to the entrance of the Villa. Not having the proper snow plow equipment they had used a  loader to shovel the snow from the dirt roads, leaving the road uneven from the loaders treads. The road ahead was fraught with mud, a thousand foot climb to the village on one road that swerved back and forth within feet from hundred-foot drop cliffs.

Now I’ve experienced a lot of things that have scared me in my life, but nothing like this. 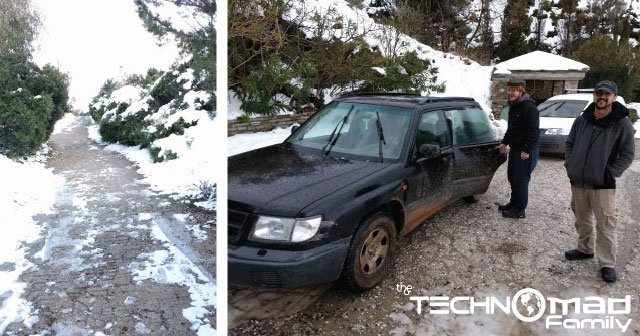 We attached the tow to the van, left our families at home while we packed in the Subaru with the Carpenter’s wife and child, while the Carpenter drove his van. As we began our treacherous drive, we slowly made the climb, experiencing sliding back and forth on the road due in part to the mud and tracks of the loader. Moment to moment was filled with fear, as we would jerk backward as the van’s weight would give. The unease of the situation made the Carpenter’s wife talk more. You get to learn a lot about a person in uncertain times. The wife hailing from New York City, had never really done outdoorsy things like camping or mudding, so her unease showed in words and actions. Her constant talking only made the situation more tense, as we would slip closer to the edges of the cliffs. My friend somehow stayed calm and composed while handling this situation, with confidence that it would be fine, which I didn’t share, but hopefully didn’t show. As time went on the mud continued to cover the car and visibility started to become a problem. He then abruptly stopped, and unexpectedly got out to check on the Carpenter to assess the situation and make sure he was alright after one given moment of uncertainty, revealing that we were in several feet of mud. After many harrowing moments, we finally got them to the village water well, which was cleared and paved. In normal conditions, this drive would only take about 10 minutes but had taken us a harrowing 45 minutes. Sometime later we arrived back at the villa with much anticipation from our families for our safe return.

After we had helped them get out we were thinking that our troubles were over, that’s when we noticed our water tap had started to trickle in and then just stopped running. After investigating the area it turned out that the plastic pipe that fed water from the village to the villa’s water tanks had been damaged from the snow storm. We had no idea, how long it would take to have the problem resolved. Until then we had to conserve what water we had. Instead of work, we were just trying to survive. Cleaning clothes had to be done by bucket and hand, drying which up to this point we air dried during warm days was done by fire or heater, and not very well. As time went on, we kept the bottles we had purchased and had to take trips up to the village water well that we had to fill up every other day. Water preparations required us to set some aside for using the toilet, which meant flushing rarely, boiling the water before using for cleaning and eating,  and we used a mini water purifier for drinking water, that we brought never expecting to use it to drink from, and we did just that. 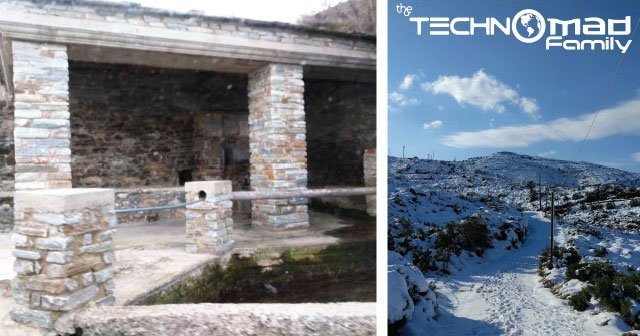 You don’t realize how much you take for granted something until it’s gone, and gone it was, for some time. There was constant communication with the owner, and the nearest form of organization with the village. We were constantly out at the Villa’s water tanks checking to see if water was coming in, and following the pipes, which because of the rough terrain and area had not been buried, but ran through above the ground from the village up above to see if we could find the source of the damage. With no luck. Eventually after about a week or so water the problem was resolved. Grateful to have running water again.

Our time there had already taught us a lot. Although this wasn’t the only unpleasant experience while we were at the Villa, it taught us a lot. That knowledge, preparations and keeping a level head can help you in any situation, even in the worst situation.

If you liked this article make sure to check out these: (click on the photo to go to the articles) 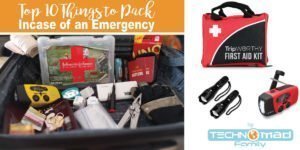 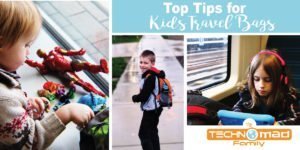 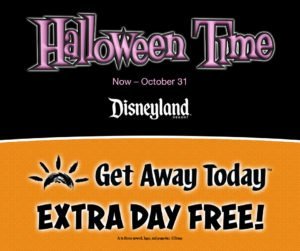